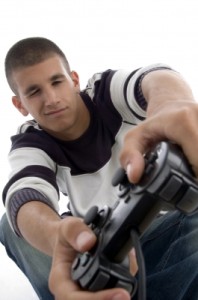 Here are some of the currently best rated and popular video games for teen boys for the Playstation 3, Xbox 360, Wii, Nintendo DS, and PC platforms. Some games are available on several platforms and some are only available on one platform. The games displayed in this section have all been given the Teen rating by the ESRB (Entertainment Software Rating Board) and contain content that is considered suitable for people 13 years of age and up.

According to a PEW survey, 97% of American teenagers plays computer, console, portable, or cell phone games. So a video game may be a perfect gift for just about any teenager!

Despite what some people may think, playing video games can be a very social activity. Many games can be played on line cooperatively or competitively. Others can be played networked together or with several devices connected to the one machine (like the wii) with players working together to solve problems.

In researching the hottest video games for boys, I looked at the score for each one on metacritic, a website which gives a score out of 100 for video games based on a weighted average of at least four respected critics. I have chosen to only present video games with a metascore at the time of writing of 75 and above. Please note that the metascore may vary over time as more reviews are Incorporated into the score. But this should give a good indication of the quality of the different games.

Click on the type of game you’re looking for: